"Friends don’t let friends get spied on.' – Richard Stallman, President of the Free Software Foundation and longtime advocate of privacy in technology.

I just returned from a two-week trip to New Zealand and then to Singapore. I wanted to have secure communications via email and via Google Duo (similar to Apple FaceTime but for both iPhone and Android cell phones) and I also wanted to be able to surf the web securely. I didn’t want any hackers to view online transactions with my bank account, credit card companies, or any online purchases I might make while traveling. While most online transactions use SSL (Secure Sockets layer) encryption, SSL has been hacked.

NOTE: See my earlier article at http://goo.gl/nbkl1g for just one example of SSL being compromised. There are other methods of cracking SSL encryption as well.

If I was using only one laptop or cell phone, I probably would install VPN software in that device. That probably would be the simplest and cheapest solution. However, I wanted to secure my Macintosh laptop, the Chromebook laptop, the Android cell phone, and the VoIP telephone I carry with me when traveling. (Someday I will write about why I carry a VoIP telephone. For now, I will simply state that I perform live telephone support for one of my business ventures.) I wanted one device to secure all of these systems.

Of course, security isn’t restricted to these devices. Some people carry Xbox video game devices, Roku or other video steaming devices, Internet-connected portable medical monitoring systems, environmental monitoring devices for the office, or other items that require an Internet connection. Most of them do not have any method of installing a VPN within the device. However, using an external VPN-capable router provides safe and secure communications to all these devices and more.

Another benefit of having VPN software or TOR installed in it’s own dedicated device is that it doesn’t use up system resources on your local computer, which can be a significant drain on resources. A separate, dedicated VPN and/or TOR router should be able to provide faster connections than installing the required software in your computer. 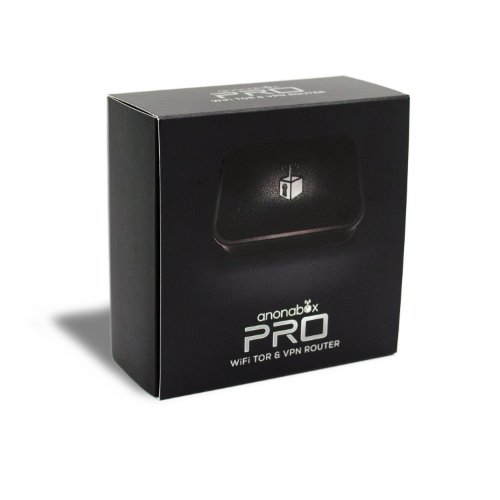 Best of all, the Anonabox PRO WiFi TOR and VPN Router is a tiny device that easily packs into one corner of my carry-on luggage. It is 2.5 x 1.5 x 1 inches and weighs just 3.5 ounces. It is even small enough to fit in a pocket. It will work with mobile hotspots that require a website login or other authentication method with a normal WiFi password, such as is normally found at a hotel or at Starbucks.

The Anonabox PRO WiFi TOR and VPN Router allows for multiple devices to connect to one Internet connection. That was useful in one hotel room in New Zealand that charged $10 NZD (about $7.33 US) for EACH device connecting directly to the hotel wi-fi network. By using the Anonabox PRO Router, I was able to connect all of my devices to the router and it, in turn, needed only one connection to the hotel’s wi-fi system. The router supports a wi-fi or wired connection to the external Internet connection as a built-in well as a second wi-fi network for connecting your various devices to the router, It also includes a wired RJ-45 connector for connecting devices that require hardwired ethernet connections, not wi-fi. You can mix and match various wired and wireless devices simultaneously.

Next, the Anonabox PRO WiFi TOR and VPN Router provides a VPN connection or a TOR connection to all connected devices simultaneously. Even a Roku or Apple TV video player can be connected to a US location with the installed VPN. Adding a layer of encryption and the ability to specify your IP location with HideMyAss! VPN or VyprVPN or with any other third-party VPN service provides excellent privacy and online anonymity by layering the TOR network with a VPN service.

Anonabox PRO WiFi TOR and VPN Router includes 30 day trials of the HideMyAss! and VyprVPN services. In theory, it also can be configured to work with most other VPN services. I already had a VPN account with a different service that shall remain nameless. After opening the Anonabox PRO and performing the initial set-up, I attempted to configure the third-party VPN. I found the set-up process to be very confusing with required technical parameters that were not mentioned in the third-party VPN’s online support pages. After an hour or two of tinkering, I gave up. I couldn’t make it work.

In the process of looking at the third-party VPN’s support site, I discovered that my annual subscription would expire in two months. I also looked at HideMyAss!’s offerings and found it has an excellent reputation for security and the annual price is almost the same as the other service I have been using. I decided to try the HideMyAss! 30-day free trial.

The setup procedure for HideMyAss! was a snap. I didn’t time it precisely but I think I was up and running within a minute or two. All the required software and setup parameters are included in the Anonabox PRO’s built-in software. Simply access the Anonabox PRO through a standard web browser once a LAN connection is made (Internet not required). Security features also include Admin and network password controls.

I wrote a note in my calendar to cancel the third-party VPN’s services a few days before the scheduled renewal date. I am switching to the HideMyAss! service for all my VPN needs.

The router also includes a 30-day free trial of VyprVPN. I didn’t test that but, based on my experience with the setup of HideMyAss!, I suspect the VyprVPN configuration experience would be similar.

The Anonabox PRO also includes built-in TOR networking. I did experiment with that and it seemed to work as expected. No configuration, installation or download is needed for TOR networking. Just turn it on in the menus and start using it. In fact, it is even possible to combine the two for even more security: use a TOR connection over a VPN. Also, TOR networking allows for easy connections to the “deep web.” However, use of TOR networking on any device will always slow the connection significantly. Since I want to use VoIP telephone connections and I don’t use the deep web, I elected to use the higher-speed VPN connection alone, without TOR networking.

In fact, the Anonabox PRO even allows for TOR Exit and even for .onion hosting. I don’t need those services so I did not test them. See https://www.eff.org/TORchallenge/what-is-TOR.html for more information about TOR Exit and TOR networking in general.

Software updates are easy to install. The built-in menus include a section of the admin interface to check for software updates, and downloading and installing an update is easy to perform by following the menus.

All in all, I am pleased with the Anonabox PRO WiFi TOR and VPN Router and plan to carry it on all my future trips. Of course, it also functions as a secure VPN and TOR networking router when at home.

The Anonabox PRO WiFi TOR and VPN Router sells for $119.99 on the Anonabox web site at https://www.anonabox.com/buy-anonabox-pro.html. However, it is available from various retailers at significant discounts. I purchased mine from Amazon for $96.00 with FREE shipping at http://goo.gl/Gp5QHs.

This site uses Akismet to reduce spam. Learn how your comment data is processed.

Want to receive a once-a-day email message containing all the new articles published here in the previous 24 hours?  (You can instantly unsubscribe at any time by clicking on a link in each email message you receive.) The email service is free.

This Blog is Mobile Friendly!

You can view this blog with a tablet computer or a "smartphone." All articles and comments in this blog will re-format to fit the size of the screen you are using.

Posts I Think Everyone Should Read

Buy a Wi-Fi Router with a Built-in VPN

How to Foil the Web Sites that Block the Ad Blockers

What Private Data Your Phone May Be Giving Away

Do You Have Any Decals in the Front Door or Window of your Home?

Edward Snowden Says Privacy is the Most Important Right

Facebook Knows Much, Much More About You Than You Probably Realize

Should You Store Your Data in the Cloud?


Remove Yourself from People Search Sites and Erase Your Online Presence

Print, Email, or Save This Blog’s Articles as a PDF file on Your Computer

Click here to Print, Email, or Save Articles as a PDF file on Your Computer

Read this blog with an RSS newsreader

COPYRIGHTS and Other Legal Things

Click here to read the copyright statement concerning copying articles from the Privacy Blog and republishing them elsewhere.

Want to receive a once-a-day email message containing all the new articles published here in the previous 24 hours?  (You can instantly unsubscribe at any time by clicking on a link in each email message you receive.) The email service is free.

Print, Email, or Save This Blog’s Articles as a PDF file on Your Computer

Click here to Print, Email, or Save Articles as a PDF file on Your Computer

Read this blog with an RSS newsreader

This Blog is Mobile Friendly!

You can view this blog with a tablet computer or a "smartphone." All articles and comments in this blog will re-format to fit the size of the screen you are using.